Features of the Monastery

Built according to the Roman style, this fort was established by King Zeno (474- 491 A.D.) 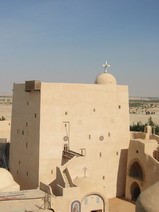 Towers spread to serve as a refuge during the attacks of the Barbarian tribes, which resided in the Northern parts of the desert and made occasional attacks on surrounding lands.

The tower is reached by a wooden bridge with one of its ends fixed to its doorstep, and the other resting loose on the stairs. This end was attached to the tower with a chain.  When it was pulled from within the building; the bridge rose and stood flat upon the wall: thus it hides the door and it separated the building from the outer world.

The tower is 18 meters high. It comprises a basement and three floors, on the third floor is a Chapel dedicated to Archangel Michael as the guardian of the place.

It also contains some secret rooms beneath or above the apparent ones, and those are used for saving the sacred church books and materials

Walls of the monastery 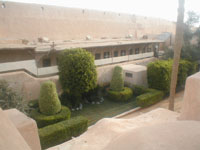 The Wall surrounding the monastery ranges in thickness from two to three meters at the base and thinning out as you near the top. Near the end of the wall, there is a walkway about two meters long where the monks can walk along it.

From the walk way they can also climb up to see the outside of the monastery through small vents and windows in the wall.  From those vents, monks are able to look over the northern, southern, eastern and western sides of the surrounding areas.

The wall of the monastery is built in a special way that prevents the accumulation of sand around it.  This is a precise architectural technique based on a geometric theory, which is used to build many structures in the desert areas.

The Door of Symbols

This is dedicated to St. Mary, and it is considered one of the oldest Coptic remains with the walls ornamented with carved 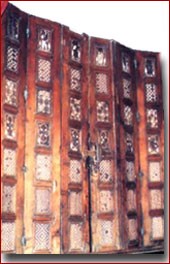 stucco, representing the Christian symbols of fish, grapes, palm leaves and some of David's Musical instruments. This door is known as, The Door of Symbols, it composed of six parts, three forming a valve on each side. Each part has seven panels of ebony, with magnificent ivory inlays.

From top to bottom they represent seven stages which are believed to cover the Christian era from the perspective of the Syrian inscription which was placed between the years 913-914 AD, and it consists of seven rows:

1- Icons of Jesus Christ, the Virgin Mary and some Coptic & Syrian patriarchs.
2- A panel stands for the expansion of the Christian Churches.
3- A panel identifies the period of formation of the Episcopal Sees of the Ancient Church (Antioch, Alexandria, Jerusalem, Rome and Constantinople).
4- The fourth panel represents an interpretation of crescents representing the expansion of Islam.
5- This panel reflects the rise of modern materialistic ideologies.
6- This row is symbolic of the weakness of the church.
7- The last row depicts the unity and dynamic expansion of the church.

This large tree stands to the east of St. Mary’s Church (the cave). It also tells a very unique story: When the Syrian monk, St. Ephraim El-Souriany (308-373 A.D.) came to Wadi El Natrun to visit his disciples, he went to take the blessings of the greatest surviving Abbott of the entire Sheheet Desert – St. Bishoy the Great. However, because St. Ephraim was weak, he walked as he leaned on a stick. Out of respect to meet St. Bishoy the Great, gave his stick to one of the monks and asked him to insert it into the earth, and he said to him, "Were it used due to weakness, it would bud out”. The cane soon took root and became the famous Tamarind tree which is still standing tall even until today. 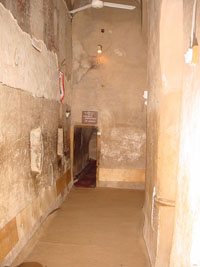 The Western aisle of the Nave that was mentioned above, leads to one of the most interesting monuments in the Monastery. A narrow and low passage leads to St. Bishoy's private cave, which is said to have been joined to St Bishoy's Monastery through an underground path.

St. Bishoy used to come to this place to enjoy quiet prayers far from the visitors. Hanging inside the cave is a chain, which St. Bishoy used to tie his hair to, in order to avoid sleeping during prayers and toiling the night in vigil.